There are some places in the world that seem to inspire creativity.  For me, two of those places are Paris and New York.  I’ve had the privilege of visiting both cities more than once, and there is something magical in the air.  Paris has always been intriguing to me because there are so many great authors who went there for periods in their lives to write.  F. Scott Fitzgerald, Hemingway and James Joyce all roamed those streets and sat at Parisian cafés to write.  I actually read Hemingway’s A Moveable Feast, a memoir about his time writing in Paris, while on a train to Paris.  How cool is that?  New York is teaming with creativity of every genre you can imagine.  There are performers on many street corners and subway platforms.  Dancers, musicians and artists are putting themselves out there for people to see.  Actors go there to get their big break on Broadway or television.  These people all have one thing in common.  They are brave enough to unleash their creativity on the world, come what may.  I have always felt like if I could spend a decent amount of time in one of these places where magic is in the air, maybe some of the creative magic would rub off on me.  You see, I never thought of myself as a creative person.  I thought to be considered creative that I had to know how to draw or play an instrument, or really like to do arts and crafts.  I believed that I had to be able to create something in the traditional sense to be a truly creative person.  What I am discovering is that every single person walking this good earth is creative in some way.  We all have ideas that want to land on us and be realized through us if we are willing to say yes.  I shudder to think of all the opportunities that I have wasted because I dismissed them on the basis that I was not creative enough to tackle it.  Imagine what we could accomplish if we were to realize the nature of the creativity that lives in each and every one of us and act on it!

I only recently started writing on a more regular basis.  I still don’t know that I would call myself a writer per se,  but I’m ready to take the plunge and embrace my creativity and surrender to what it wants to do through me.  Now if I can just push past my fear.  I think fear inevitably comes along for the ride when it comes to expressing creativity.  Here are some of the fears that I have to push past:

I could go on, but you get the drift.  Creativity is scary.  I think that’s why I find it so remarkable when I see people who are brave enough to dance on a street corner, or get up in front of a crowd and share their story.  Imagine for a minute what life would be like without those people’s creativity.  It would be so dull and boring, wouldn’t it?  Life would be monotone and mundane.  Creativity adds vibrant color to this world that we live in.  Creativity adds vibrant color to my everyday life when I am daring enough to let it flow through me.  I am imagining my life going forward as I embrace my creativity.  I challenge you to imagine where creativity will take you too. 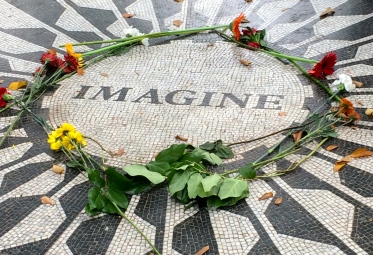